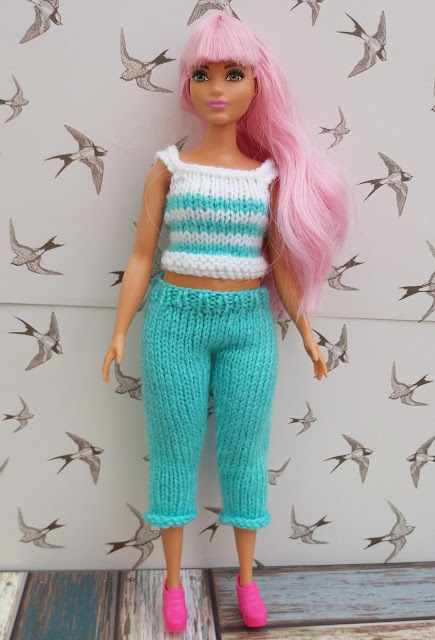 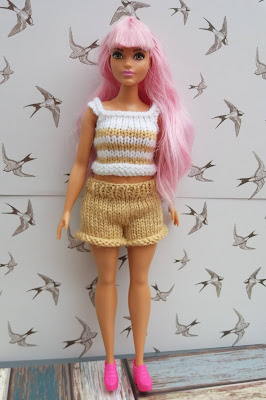 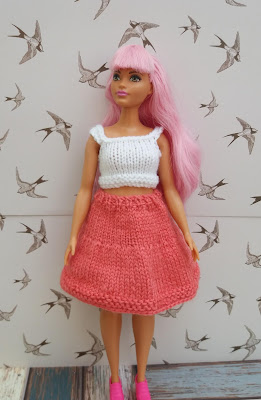 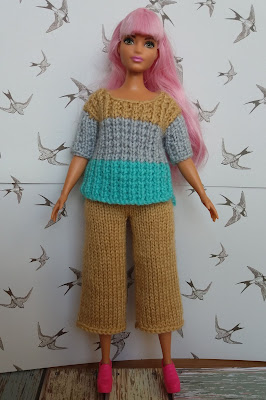 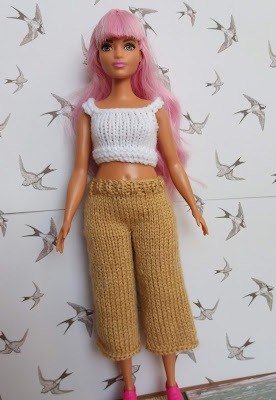 More outfits for Curvy Fashionista doll made in 4ply yarn

The trousers have a few styles, cut offs, shorts of any length you want and the current trend of wide mid length trousers that both my granddaughters seem to love.  I've done a rolled hem but feel free to do garter stitch or rib if you prefer

The top can be striped or plain and any length.  I made the white top a bit shorter than the rest - very trendy just now.
And for good measure I added a skirt.  The block colour sweater looks great with the wide trousers and can be found on this site here
Barbie ribbed sweater

The trousers are made in the round and as Curvy Barbie needs a back fastening for a good fit, the top is made on single pointed needles.  As I've probably mentioned before I'm not a great fan of knitting in the round, (except for socks - I love socks) but must admit its so easy to make these little items this way.  I used circular needles using the magic loop method which work great but use whatever you prefer.
Not everyone uses dpns so I've added a section for those of you who prefer to use single points.

To Finish
Fasten off all ends.  Sew any gaps from the joining of legs

As trousers to *
Knit 8 rounds for shorts
Knit 34 rounds for straight trousers
Or length you want allowing 3 rnds for turn up.
For no turn up light press hem to flatten
Finish as trousers


To make on Single pointed needles

I would love to hear from you

I'm always looking for ideas for patterns for barbie, build a bears or other dolls. If you have any suggestions or any other queries please contact me
If you would like to receive an email when new patterns are posted let me know.