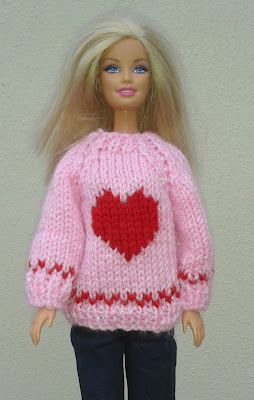 As its nearly Valentines day, I've posted this heart sweater, which takes only 25g of dk yarn and a small amount of contrast.

The front, back and sleeves are made to the armhole then the raglan shaping knit in one piece.  Its always a challenge to try and make these small items easy and less fiddly to knit and with this way there is only a smallish seam for one raglan and then the arm and sides can be sewn up in one seam.  When making the motif, use separate strands of pink yarn so you don't carry yarn across the motif.  When changing colour twist the yarn to avoid a gap.  If your new to block colour knitting (intarsia) try this tutorial
Intarsia

I've designed this pattern to fit the basic Barbie but, as its a loose fit should also fit the new curvy fashionista doll.

As always, please let me know if you find any mistakes or have any queries.

With right side facing slip sts onto left hand needle in the following order: 17sts back, 14sts first sleeve, 17sts front, 14sts second sleeve,  yarn should be at the beginning of row.   62sts

Work 4 more rows decreasing as set to 30sts,  Don’t fasten off yarn and continue with neckband

Sew raglan seam with buttonhole to 1” of neck edge.
Sew side and sleeve seams, fasten off all ends
Sew on small button to correspond with buttonholes
neaten all ends